Although Switzerland is known as a direct democracy, its political system and frequent referendums remain a great mystery to most foreigners, if not an anomaly. 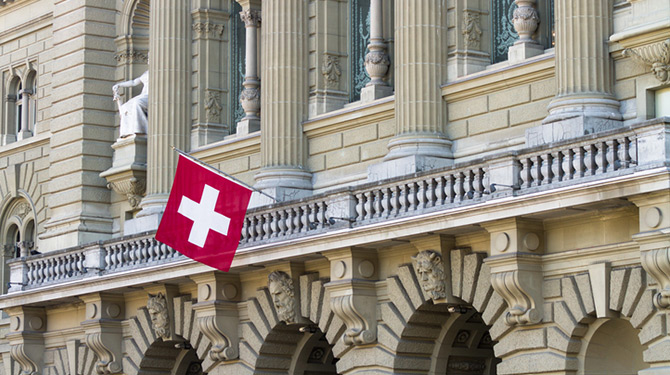 Although CH, meaning Swiss Confederation, is the country's international code, Switzerland has been a federal state rather than a confederation since 1848.

What is federalism in Switzerland, and what is it for?

Switzerland is a federal state, which means that power is not centralised, but divided between the municipalities, cantons and the confederation. People have a direct influence.

This sharing makes it possible to unify and ensure the coexistence of linguistic, religious and territorial diversities and minorities. Switzerland is therefore a nation based on mutual consent and the fundamental principle of the separation of powers. 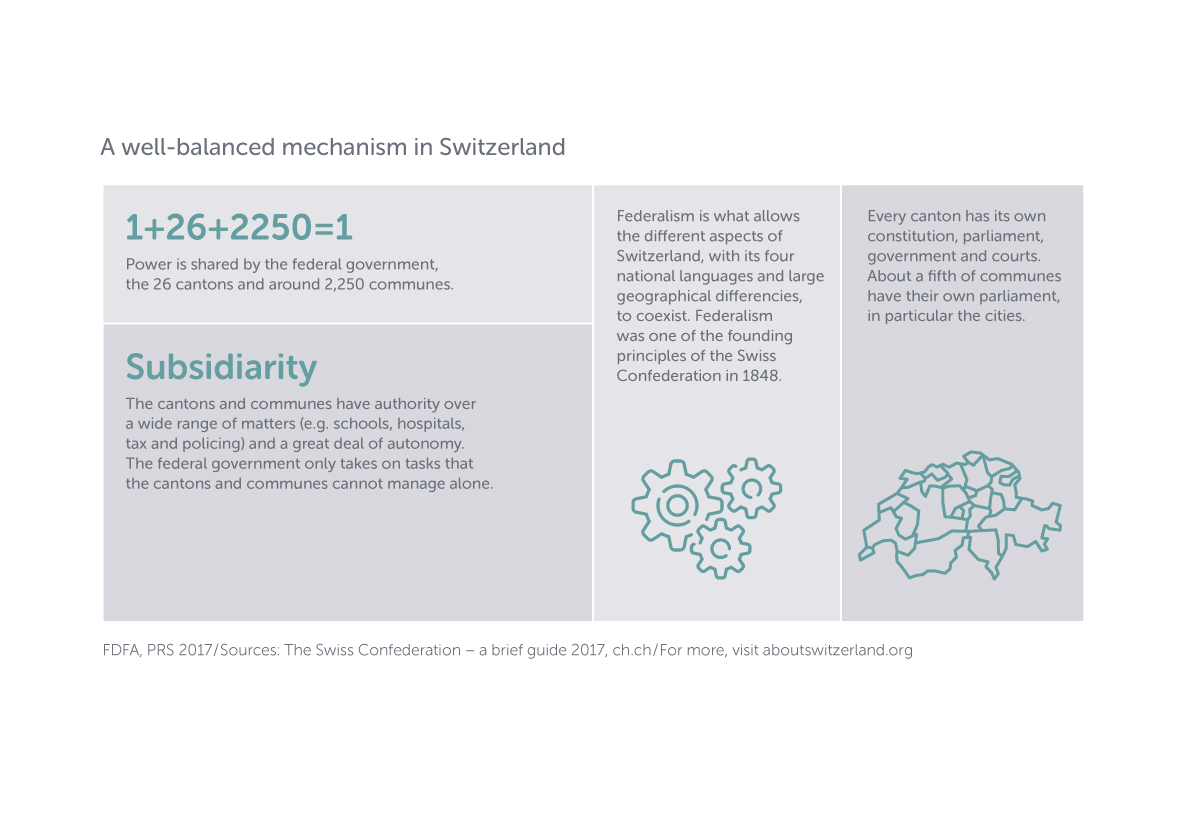 What is direct democracy in Switzerland?

Direct democracy, unique to the Swiss, allows the people to participate in political decisions at the federal and cantonal levels. Its main "cornerstones" are the citizen's initiative allowing a revision of the Constitution and the referendum, which allows a decision to be made on certain laws adopted by Parliament. 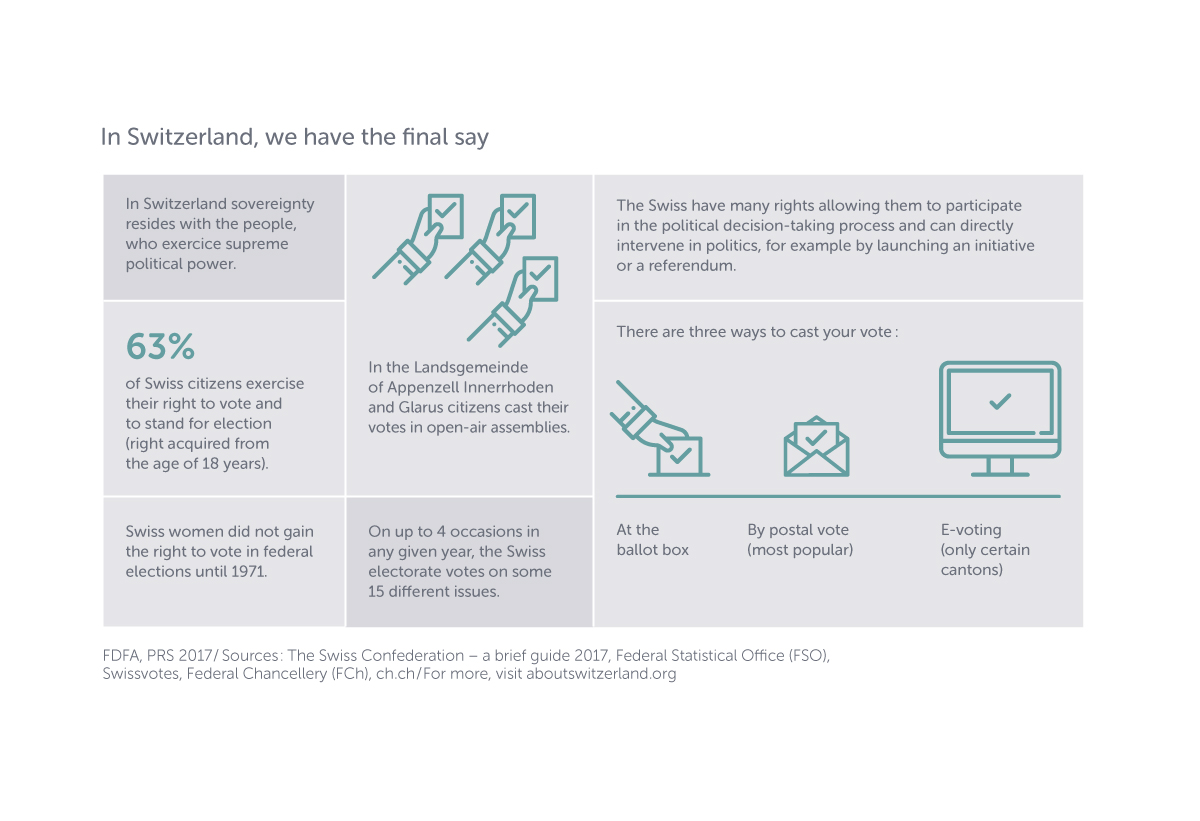 The Federal Council is the government of Switzerland. It is composed of seven councillors who are elected by the Federal Parliament. Their role is to manage day-to-day business, oversee the Confederation's finances and put forward laws to be adopted by Parliament.

Each councillor chairs a department of the Federal Administration. They are elected by Parliament for a term of office is four years and are considered the voice of the people.

Decisions are made in a collegial manner, i.e. by consensus. Federal councillors must defend the government's position, even if it differs from that of their own party or their own personal beliefs.

The role of President is essentially the role of Switzerland’s official representative, which consists of welcoming visiting heads of state, leading the Federal Council meetings and delivering speeches on New Year's Day and on the country's national holiday (1 August), among others.

General staff of the Federal Council

The Chancellor is elected by Parliament for a four-year term. His or her main role is to support the government.

He or she takes part in the various meetings of the Federal Council, but does not vote.

The Chancellery's various tasks include the translation of laws, voting materials, treaties and ordinances; the communication and publication of Federal Council decisions; and the management of residences where the Federal Council receives guests.

They meet to elect members of the Federal Council and the federal courts, and together they form the Federal Assembly (united chamber).

The role of Parliament is to

Why are there two chambers if they do the same thing?
It's all about balance! Bicameralism makes it possible to strike a balance between large and small cantons, and to give more weight to minority language regions.

And how are decisions made?
With the exception of the Federal Assembly, decisions are taken separately and the chambers deliberate independently of each other.

What happens if opinions differ?
The chambers put forward their own points of view and settle their differences until the law is adopted by both chambers. In the event of persistent disagreement, the draft law is abandoned. 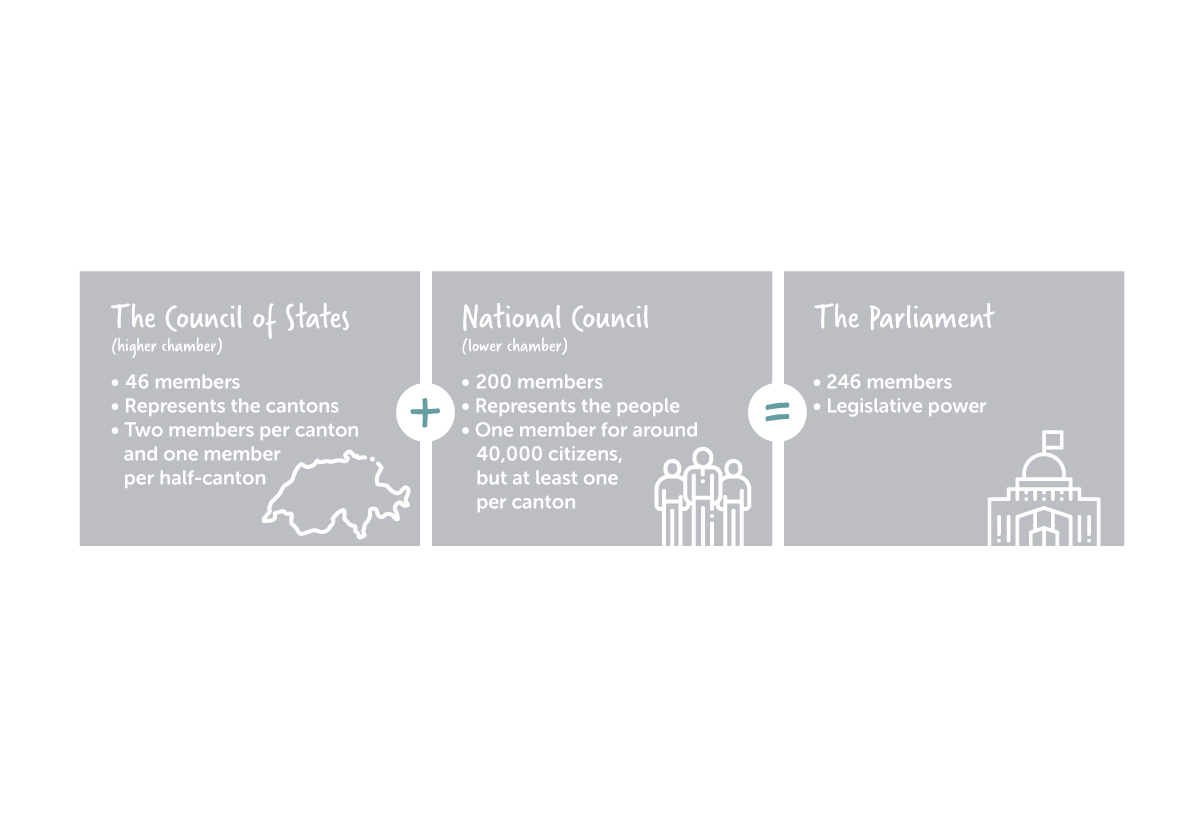 The courts of the Confederation

There are four courts at the federal level:

1. The Federal Court has the highest judicial powers in Switzerland.

2. The Federal Criminal Court handles cases and infringements that pertain to the Confederation. 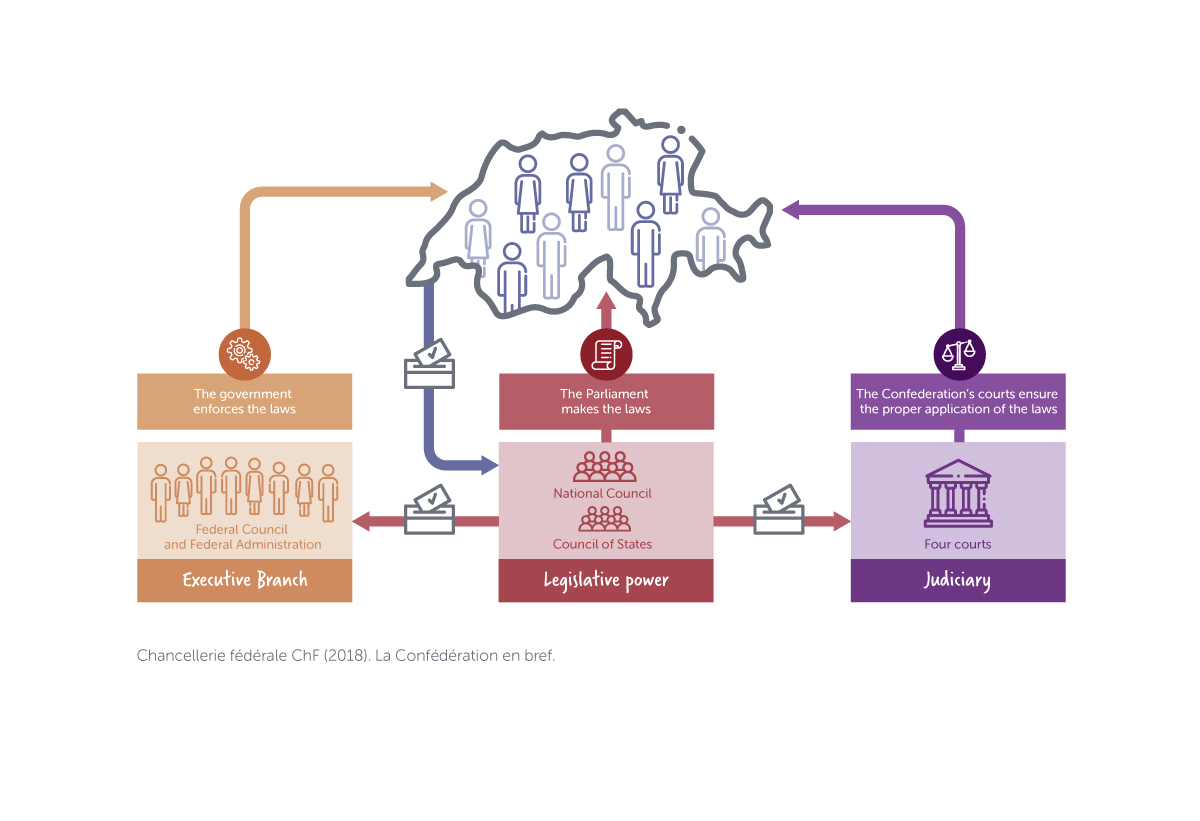 This article contains links to third-party websites. They are provided solely as information and their purpose is not to promote subscription to the products offered by Crédit Agricole, which has no commercial links with the owners of these sites. This information should not be considered advice – financial, fiscal or otherwise.
Chat