Home / Our Offer / Expats / Living in Switzerland / What is the cost of living like?
How much does it cost to live in Switzerland?
Discover us

Incomes are high in Switzerland, but so is the cost of living. To avoid unpleasant surprises, as an expat it is vital to decide and accurately plan what your monthly budget will be spent on before you arrive in Switzerland.

In 2015, the average Swiss household made up of 2.17 people had a total disposable income of CHF 6,957, allocated on the following consumption items in order of priority: 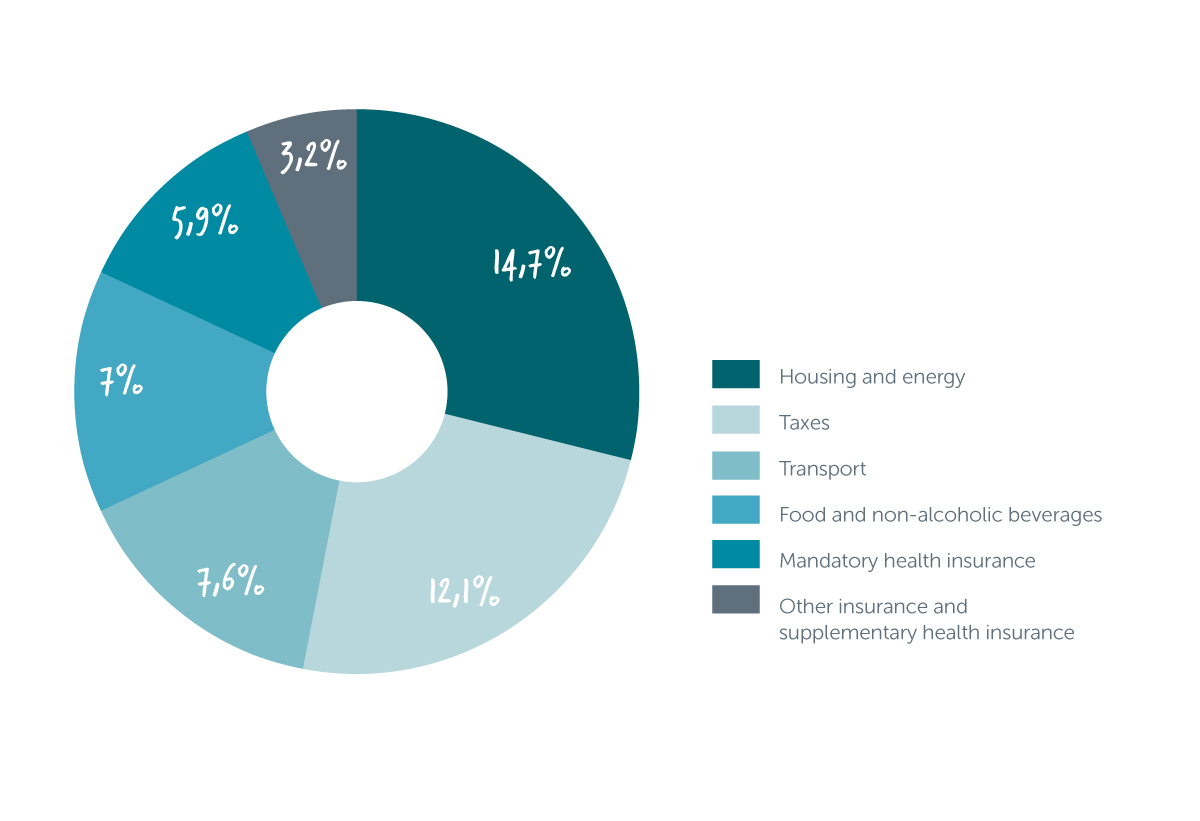 An average Swiss household is left with 14% of its gross income at the end of the month which can then be converted into savings.

See below for an example of a budget1 taking into account the average salary of a single person:

Using different websites you can calculate your budget taking into account your income bracket, your place of residence as well as your family situation (married, single, with children, etc.).

Differences between cantons should be taken into account when choosing a place to live.

The most expensive cantons are Geneva and Basel (high housing costs, above-average health insurance premiums). The cheapest cantons are Uri and Glarus (low housing costs, moderate taxes). Changing place of residence would enable some households to stretch their budget further.

The provides an overview of all Swiss cantons, allowing for some interesting comparisons.

Rent, including charges and parking space, should not exceed one third of your net income.

The monthly rent for a standard four-room apartment costs an average of CHF 1,865. In some municipalities in the canton of Jura, you would pay less than CHF 1,200 for a similar apartment.

However, if you decide to live in a major city like Geneva or Zurich, the rent may exceed CHF 2,000 and in some districts, it could be as high as CHF 3,000.

Mandatory health insurance premiums makes a sizeable dent in a household's budget. For a single person, the average monthly premium is CHF 330. For two people, this amount should be doubled, and if children are taken into account, an additional CHF 100 per child should be budgeted for. In total, the premiums per month for a family with two children (under 18 years of age) amount to CHF 1,000.

There are major differences between insurance policies, excess and the models available with costs varying greatly from canton to canton. It is relatively easy to compare insurance policies and providers online.

In Switzerland, the government is not the only authority that levies taxes. Taxes can vary enormously, not only between cantons, but also between municipalities.

Taxes are generally higher in French-speaking Switzerland and in urban centres than in rural municipalities.

You can how tax rates vary between cantons and municipalities.

Commuting between home and the workplace

Seven out of ten workers do not work in their town of residence. The average worker travels 14.5 kilometres to and from work in the space of 30 minutes.

Transport costs are higher outside cities, but they are generally offset by lower housing costs.

People who commute by car sometimes pay four times more than they would for public transport.